Proud to have my first piece on new financial satire site extraordinaire, Hard Money, part of The Hard Times family. Click here to get to the article and be sure to give HM a follow on the socials for more financial funny.

Below are some recent one-liners of mine that the visual wizards at Omnarchy took and ran with for their Dystopian art/meme series on Instagram, their main home on social media. Proud of these and love the ongoing synergy between myself and the Omnarchy crew.

We all know the reasons why. Listing them off one-by-one not only would be a difficult, strenuous task due to the cavalcade of calamities and catastrophes, it would likely be akin to water torture, where a single drop of water hits our forehead over and over and over thereby rendering us even more weary, broken and scared/scarred for life.

It’s been a time.

So, what better way to lighten the 2020 mood than a re-watch of everybody’s favourite feel good tale, the-2009-John-Hillcoat-directed-film-adaption-of-Cormac-McCarthy’s-classic-laugh-fest-novel, “The Road.”

The movie that literally put “the road” in road movie.

You remember it, don’t you? Viggo Mortensen and Kodi Smit-McPhee star as a father and son on a madcap romp across a lovely, though slightly cold, stark and barren, landscape as they outwit and outlast a series of sneaks, rogues, thieves, murderers, marauders, road bandits and general ne’er-do-wells and it’s a gutbustin’ riot, let me tell you. And it all ends on a beach! Fun, right? And then on that beach the father dies after getting shot with an arrow or something like that and Guy Pearce shows up to help the kid and he might be a good guy, maybe not, haha, whatever, it’s cool. You know how you can have so much fun watching a movie that the plot doesn’t really matter because it’s spiriting you away, higher and higher, into the atmosphere of light and joy? And how you can laugh so much you run out of laughs, leaving you worn out with sheer elation?

Well, look no farther than the source material for why this film is so easy, breezy, hilarious and heartwarming. With a sunny scribe like Mr. McCarthy at work, a writer whose effervescent prose practically twists and twirls off the page with passion and joie de vivre, there was no way the film couldn’t follow suit. But that’s not to say that either book or film lacks substance. No, far from it. In fact, the great achievement of this film may be it proving the point that even a blockbuster, a so-called “popcorn film,” one that’s fun for the whole family, can still reveal something about ourselves and our lives and show us a kinder, better side of humanity in a more just and comprehensible world than we’re experiencing today.

I mean, this movie screams “good time” and I do mean scream. As in screaming, “Run!” and “Hide!” and “Watch out for the cannibals!” Oh, those kooky cannibals. Such hijinx.

So, if, like me, “The Road” puts you in the mood for more equally inspiring fare in order to fight the real horrors of 2020 with some by-comparison sunshine, unicorns and rainbows, why not try other such lighthearted hits as “Seven,” “Dancer in the Dark,” “Requiem for a Dream,” “Monster,” “Leaving Las Vegas,” “Old Yeller,” “The Elephant Man” or “Revolutionary Road.”

I doubt you’ll be disappointed.

Are you President Trump, the smartest, most handsome and virile President that ever Presidented?

As background, would you say you’re a stable genius or an anchored genius?

What is three times six divided by two plus five? You have 14 seconds to answer.

Of these three fingers I’m holding up, how many do you see?

As I tap on your knee, can you tell me where I’m tapping?

Are you as aware and keen-sighted as an eagle or an owl?

Do you feel as fit as a fiddle or a 35-year-old decathlete?

Would you say your diet is (a) amazing (b) great (c) terrific or (d) probably the best diet anyone’s ever eaten ever?

Did you almost die in the hospital?

Would you describe taking Regeneron like drinking an elixir of the Gods or drinking from the fountain of youth and are you now, in fact, immortal?

Do you have stocks in Regeneron Pharmaceuticals and, if so, would you give me some?

Did you cure anyone else at the hospital just by looking at them because you’re now a superhero and, if so, would you be in the Avengers or the Justice League?

Thanks to Covid, what could you lift higher: a ton of bricks or a ton of feathers?

Also thanks to Covid, who could you beat faster in arm wrestling: Former President Obama or three Sleepy Joes?

How capable are you to govern this country right now: like two Abraham Lincolns or four Ronald Reagans? 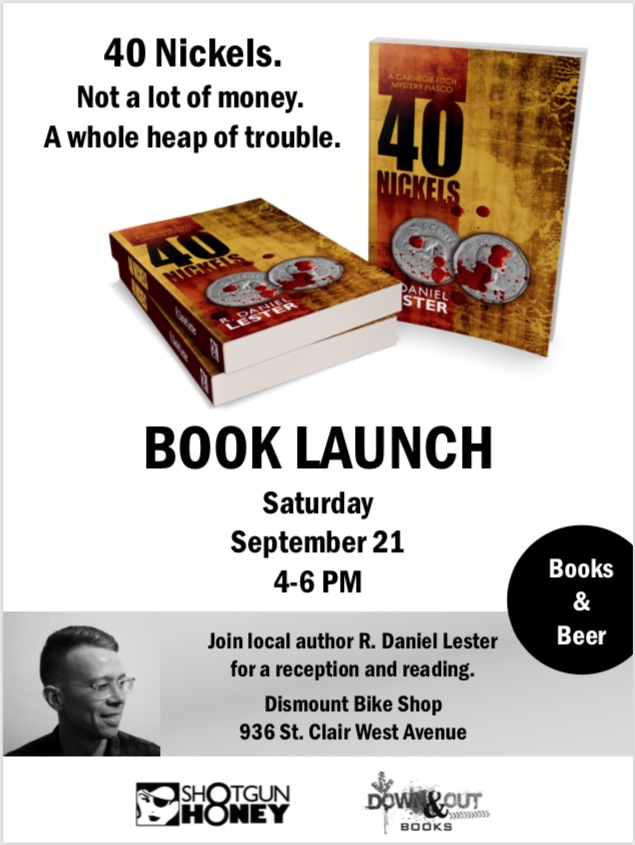 Grease Paint & 45s is now available for pre-order! I’m super-honoured to have my story, “Gut Punch” in this one because the author list is stacked. And that cover is a beaut. Check it out here!

One of my favourite short stories, previously published in print in 2015 in the excellent Pulp Literature got a new release online in the staff issue of Syntax & Salt Magazine. I’ve recently been reading submissions for this fantastic speculative fiction mag and am honoured to be included.

Some Say the World Will End in Fire by R. Daniel Lester

My short story “One-Shot Deal” has been published online at Retreats from Oblivion: The Journal of Noircon. I love the black-and-white image chosen to accompany it. Check it out at the link below and don’t miss out on the many other noir gems there. The Retreats from Oblivion crew has amassed an awesome collection of authors, with more being added all the time. Don’t sleep on this site!